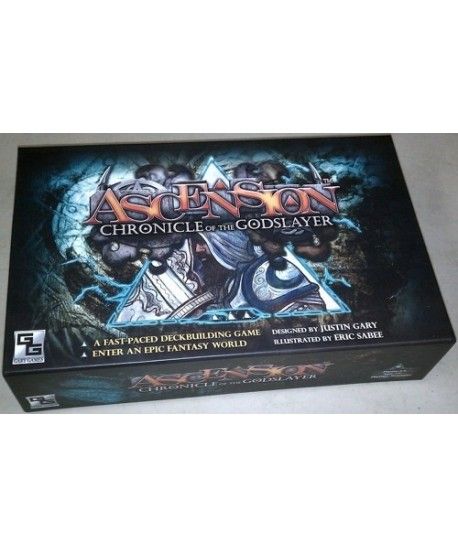 Ascension: Chronicle of the Godslayer

Get Ready to Ascend!

Ascension is a fast-paced deckbuilding game that’s quick to learn, easy to setup, and packed with endless hours of replay value! Our goal with Ascension was to make a game that we would bring out again and again for our own game nights. With an all-star team working on design and development, including Magic Pro Tour Champions Justin Gary, Rob Dougherty, and Brian Kibler, and John Fiorillo, we’ve spent the better part of a year making a game that will appeal to fans of the board games, trading card games, and non-gamers alike.
The World of Vigil

The game takes place in Vigil, a prosperous world that has been protected for millennia by the Great Seal, keeping the realm free from divine influences. It was put in place after an ancient war with a corrupt god, Samael the Fallen One, when it was decided that none of the gods should be able to interfere. But now, thanks to the efforts dark-souled Cultists, the Seal is failing, and nightmarish Monsters that had been forgotten are breaking through. Your job, as a hero of Vigil, is to take your small, ragtag band of Apprentices and Militia, and gather an army powerful enough to lead you to your destiny as the Godslayer, and in doing so, slay Samael once and for all.

Luckily for you, the breakdown of the Great Seal has also allowed followers of the other four gods to cross over to Vigil and aid you in your battle. Each god’s faction offers different paths to victory, and different philosophies.

Railways of the World Card...