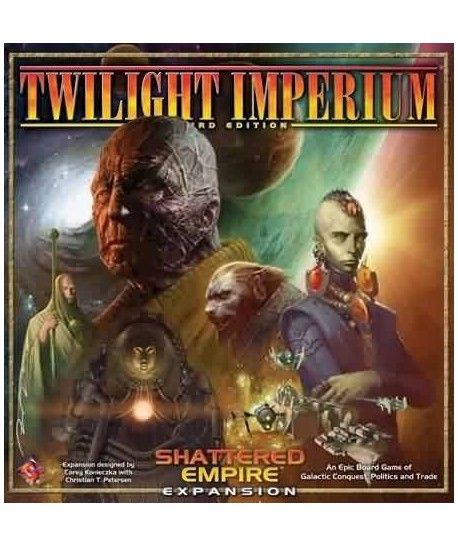 Welcome back to the Twilight Imperium universe. In the Shattered Empire expansion, the galaxy is larger and more dangerous -- and the glory of conquering it is greater than ever before. ﻿

Welcome back to the Twilight Imperium universe. In the Shattered Empire expansion, the galaxy is larger and more dangerous -- and the glory of conquering it is greater than ever before. Now four new races enter the struggle for the Imperial Throne, and up to eight players can vie for control of the galaxy. There are new planets to conquer and new spatial anomalies to contend with, but there are also new technologies to aid each race. As war rages across dozens of systems, the question remains: Who will unite the pieces of this shattered empire and lead the galaxy into a new age?

In addition to new plastic pieces, new race sheets, and new system tiles, this expansion also adds new Strategy Cards, Political Cards, Action Cards, and Public Objectives, as well as many new optional rules.
* Four never-before-seen races join the struggle for empire!
* Two new colors of plastic units to allow for up to eight players in a single game.
* Dozens of new system tiles, including new special systems such as Ion Storms, Hope's End, trade stations, and the Wormhole Nexus.
* Brand new technologies for all eight players, including a new never-before-seen type of tech!
* Eight new variant strategy cards for a completely different gameplay experience, and an additional variant Imperial strategy card for optional use with the core strategy set.
* An even broader array of agendas and options in the form of new Action, Political, and Objective cards
* Facilities, shock troops, artifacts, space mines, and more!

Roll for the Galaxy: Ambicja